By land, Bulgaria is the closest EU Member State to Pakistan, but so far, the volume of the bilateral trade between the two countries is negligible – US$ 34.2 million, which is as a drop in the sea. This is indicated in an analysis of the Embassy of Pakistan in Sofia, which makes a valuation of the Bulgarian-Pakistani relations during the past year.

If we trace theoretically a shipment of goods loaded onto a truck, it will leave Pakistan at Taftan, Baluchistan province, and after passing through Iran and Turkey, it will enter Bulgaria, i. e. the EU, in about 5-6 days. The same goes for the return trip. This geographical proximity can be exploited by traders and trade companies, who should also bear in mind that Pakistan and Bulgaria have signed an agreement to avoid double taxation in June 2019.

Exports from Pakistan to Bulgaria are approximately US$ 20.8 million, while imports from Bulgaria are estimated at about US$ 13.4 million. Currently the opportunities of importing Bulgarian yoghurt and aromatic oils to Pakistan are being explored. There are unused opportunities in the trade of rice, textile, pharmaceuticals, surgical instruments, sports goods, as well as in areas such as agriculture, high technology and communications, tourism, education and science, mechanical engineering and energy. These data were discussed also at a meeting this month between the Chargé d’Affaires a.i. at the Pakistan Embassy in Sofia, Mr. Marwan Alex Ayyash and the Executive Director of InvestBulgaria Agency, Mr. Stamen Yanev.

One of the sectors with the greatest opportunity for cooperation is the high technology sector and the IT sphere, which is developing very well, both in Bulgaria and Pakistan, so achieving cooperation in this area would be a significant accomplishment, it is said in the analysis of the embassy.

In that analysis it is also recalled that Pakistan and Bulgaria have always enjoyed friendly relations, driven by mutual respect and similarities in their vision on global and regional development. The diplomatic relations between the two countries were established on June 15, 1965, as Bulgaria opened its embassy in Islamabad 3 years later. The Pakistan embassy in Sofia re-opened after a decade-long period in 2009. 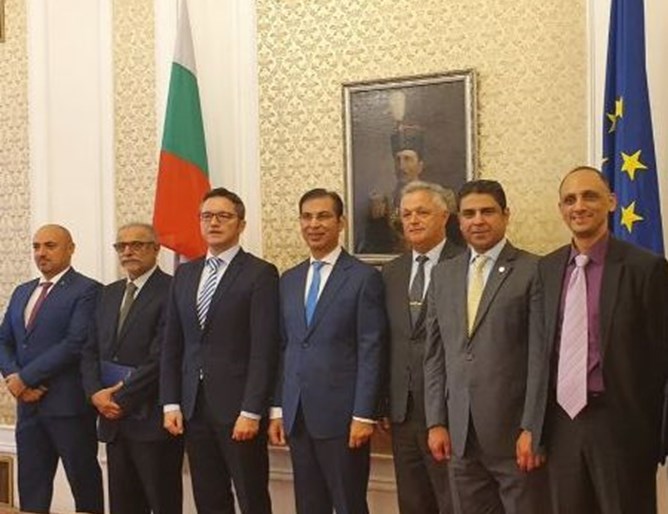 Meeting between delegation from Pakistan with Bulgarian MPs, members of the Friendship Group with Pakistan.

In 2015, the two countries celebrated the 50th anniversary of the establishment of diplomatic relations. On this occasion, Bulgaria has validated a special post stamp to mark the occasion. As a member of the EU, NATO, OSCE, Berlin Process, IMF and WTO, Bulgaria has gained additional prominence for Pakistan’s foreign policy matrix, it is also pointed in the material. As well as the fact that the Embassy of Pakistan in Sofia is proud and spreads the richness of the Pakistani cultural heritage and the synthesis with the Bulgarian traditions, which are observed in various aspects.

“Many theories are convincing that the Proto-Bulgarians moved many centuries ago from South Asia to the lands that today mark Bulgaria. The northern territories of Pakistan are very similar to Bulgaria, in particular in some motifs of traditional clothing. The Kalash women from Chitral, for example, wear clothes that are very close in terms of details to the traditional Bulgarian costume. ”

In 2019, the embassy has also organized several events as part of sports and cultural diplomacy.