lqbal was born at Sialkot on November 9, 1877. He held a brilliant academic record. After receiving his early education from Murrey College Sialkot, he did his Masters in Philosophy from Government College, Lahore and joined there as a lecturer. He left for Europe in 1905 and stayed there for three years. lqbal studied Philosophy and Law at the Trinity College, Cambridge, Lincoln’s Inn, London and the Munich University. He was awarded a Ph.D by the Munich University on his renowned thesis “Mabaadut Tibbiyat”

He returned home in 1908 and rejoined service in the Government College, Lahore. He resigned after sometime and started practising Law. He was elected Member of the Punjab Legislative Assembly in 1926 for three years. In 1930 lqbal was elected President of the Muslim League session held at Alahabad. In 1931 and 1932 he attended the Round Table Conferences which met in London to frame a constitution for India and took active part in its various committees

He was the first to give a concrete shape to the Muslim aspirations in India for ‘a separate homeland’, and defined its geographical boundaries as clearly and unambiguously as it could be possible far back in the year 1930. In his presidential Address at the Annual Session of the All India Muslim League at Allahabad (1930) he boldly asserted the Muslim demand for the creation of a Muslim India within India, and said “I would like to see the Punjab, the North-West Frontier Province, Sindh and Baluchistan amalgamated into a single State”.

It was lqbal’s ferent appeal which persuaded the Quaid-e-Azam in 1934 to return from England and lead the Muslims of the Indo-Pakistan Sub- continent in their struggle for constitutional rights and it was in his letters to the Quaid-e-Azarn that he elaborated his scheme in its political as well as cultural context. He succeeded in convincing the Quaid-e-Azam that Pakistan was the only solution to the political problems of the Muslims of India, and it was on the foundations laid by 1qbal that the Muslim League’s historic Pakistan Resolution of 1940 was based.

Thus, lqbal gave the blue-print for Pakistan. But the role he played in promoting an intellectual revolution among Muslims of the lndo-Pakistan Sub-continent is even more important.

He was a profound thinker who believed in dynamism, and throughout his poetry and prose he placed the greatest emphasis on ‘action’, interpreting it as ‘movement’. Some of his epoch making poems are ‘Shikwa’, ‘Jawab-e-Shikwa’, ‘Shama aur Shair’, ‘Asrar-o-Ramooz’. His genius is manifest in literary masterpieces like ‘Payame mashhq’. ‘Bange Dira’. ‘Zabure Ajam’, ‘Bale Jibril’, ‘Zarb-e-Kalim’, ‘Pas Che-Bayad Kard Aee Aqwame ‘Sharq’ and ‘Armughan-e-Hijaz’. Of all his masterpieces ‘Javid Nama’ could truly be regarded as lqbal’s Magnum opus.

He believed, on the one hand, in the emancipation and freedom of the Muslims of the lndo-Pakistan Sub-continent and on the other, he argued for the unity of Muslim nations all-over the world. lqbal’s political philosophy is not atomistic but organic in that it implied the formation of an association of the Muslim countries to better their own lot and be the upholder of peace and justice throughout the World. His verses in Urdu and Persian and his monumental treatises have been translated into almost all the important languages of the world and found wide recognition in Iran, Turkey, Egypt, England, France, Germany, Italy, USSR etc.

He died on April 21, 1938 at Lahore and was laid to rest near Badshahi Mosque. An academy named after him has been established by the Government of Pakistan to Promote and disseminate the messages and teachings of Allama Iqbal. 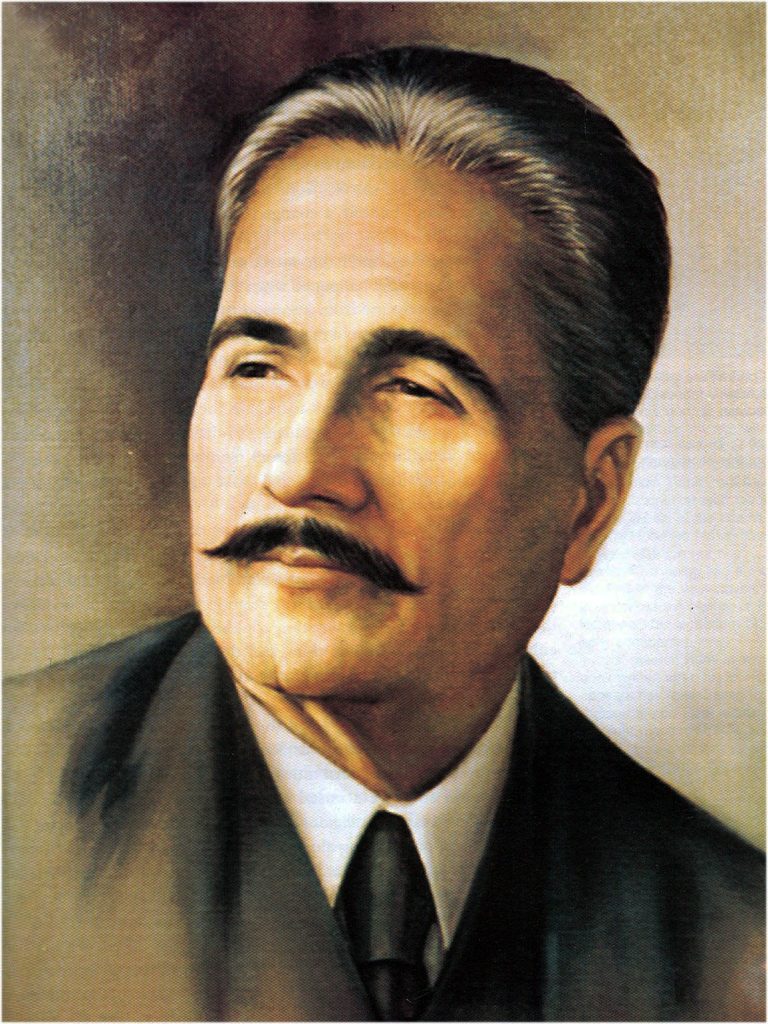